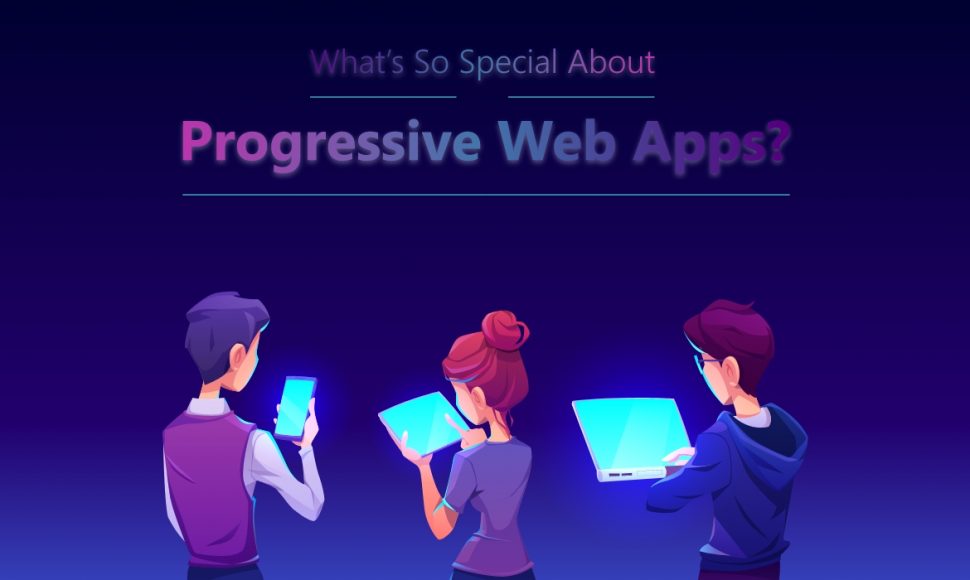 It would have been just a theory to develop an app that can function like other Native apps and loads through web browsers like websites until Google introduced Progressive web apps term. Developers tried to obtain Native apps like feels and look by creating Hybrid apps using web technologies. However, hybrid apps require installing, accepting permissions, and downloading the same as the native apps that take a long time to run.

In 2015, Google Chrome developer Alex Russel and designer Frances Berriman came up with an embodiment of progressive web apps that build better experiences across devices and contexts within a single codebase. PWAs is an acronym for Progressive Web Apps, are just websites that take all the right vitamins, says Alex Russel.

PWAs, in other words, are web applications that run in devices’ standard web browser the same as any websites or web pages. The progressive web app development needed to be discovered to enhance the web experience on mobile devices. These apps do not take any time to get installed, but just one tap “Add to Home Screen,” and there you go!

Yes, the apps you have been adding on your mobile device right from the website you visit are progressive web apps. They work the same as other apps installed on your device, don’t they?

After a brief introduction, let us now have a look at the problems that PWA development solves and the main features of the PWA.

The PWA possesses the potential to work even when there is a bad or no internet connection. The ability to have access to the app even offline keeps users engaged as they can look at the product catalog and keep adding new items to their cart. Once the app connects with the internet, it keeps up with the offline activity and offers a reliable experience to the user.

The modern web solution progressive web apps provide consistently faster performance that overcomes traditional websites’ problem of being slower to load. With the user downloading the app to start interacting with it, the app caters to users’ needs in real-time.

Coming to user engagement, PWA comes full of features that a user enjoys in any native app and never makes users feel any different during the app interaction. It consists of the native-like elements such as the app icon, save to cart, in-app support, secure login, and push notifications that help to keep users engaged with the app.

PWAs solve another major problem: downloading and keeping a big-sized app from the Play Store or App Store. Even though Progressive Web Apps carry the same features and functionality of a native app, they are light as a feather. Some of them are just in KBs. If you see the Pinterest app’s size on the Play Store 16 MB and the App Store 81.7 MB, it’s PWA version is just 205 KBs.

Progressive web apps will save your efforts, time, and money spent on mobile apps periodically to keep them up to date. As they are not really an app but a web app that possesses the service worker process, you do not have to update PWA.

No limit of any platforms or devices

Unlike native mobile apps, progressive web apps -PWAs are not pivoted on any particular platform or device. They are accessible across all platforms and devices without limit. Users can access the PWA through any browser with its URL.

Besides, these apps are easily discoverable via search engines. It means it will quickly appear when a user searches on their browser with specific keywords as per their needs and requirements.

When it comes to the internet, the safety of content from being stolen, shared, or hacked is a critical subject. Nevertheless, PWAs got you covered here as well as it uses HTTPS protocol and encrypts the data so that it becomes difficult to intercept and change or hack users’ data.

From the users perspective:

From the businesses perspective:

From the developers perspective:

What are the challenges of Progressive Web Apps you may come across?

Twitter is one of the early adopters of PWA development and among the biggest beneficiaries. Twitter Lite helped twitter to increase engagement. It loads in just 3 seconds. Consequently, it witnessed a 65% boost in pages per session and 75% in tweets. Further, it reduced 75% of data consumption and a 20% bounce rate.

Progressive Web App has been beneficial for Pinterest as soon after its PWA launch, Pinterest observed around a 40% hike in time spent by users and 60% in engagement. Moreover, its user-generated ad revenue increased by 44% and ad click-throughs by 50%.

Popular eCommerce website AliExpress that has an enormous customer base all around the world is one of the early adopters. AliExpress witnessed the peak in the conversion rate for new users by 104% after launching the Progressive Web App.

The world-famous social media has also developed a progressive web app for its million user-base. Instagram PWA is more like the native app and consists of all the main interaction features, from notifications to view Stories and like posts.

Progressive Web App is changing the way of experiencing a mobile web by making the process of accessing web app functions similar to native apps. Without a doubt, the PWA technology is booming rapidly, whereas many famous brands have already leveraged the PWA technology.

Despite being quite limited in cross-browser support specifically in Safari and Edge, PWAs offers ace class web browsing experience beyond responsive web design and native app. The technology is highly useful to provide better user experience and customer engagement at the best price.

A PWA developed with pure HTML, CSS, and JavaScript opens the door of success for businesses. Developing and launching a PWA requires less time and cost to develop than a native app. Users can install the progressive web app on the go with surfing the web browsers that significantly increase the conversion rate.

Moreover, PWAs are highly responsive that can run on any device like an app and don’t require to update periodically like native apps. Thus, PWA is a hot topic because of its exceptional advantages and features. Looking at the ratio of current PWA users, it can be said that it is becoming a dominant force in the world of app development.

Progressive Web App development is an amazing and cost-effective alternative to native app development. Rather than developing an individual app for Android and iOS, you can opt for PWA and relax as it will work over every device. Besides, you will not have to worry about any maintenance or updation cost as well.